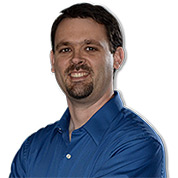 Bret Rooks has been interested in the design of structures since junior high school, leading him to study drafting and architecture throughout his high school education, eventually graduating with a Bachelor of Science in Architectural Engineering from Cal Poly, San Luis Obispo, in 1999.

Shortly after graduation, he accepted a position at T&S Structural Engineers, and since that time he has worked on hundreds of projects up and down the West Coast of California. For a time, he also served as a lecturer for the Cal Poly Architectural Engineering department, teaching a course on small-scale structure design to architecture students.

After spending several years focused primarily on high-end custom residential and educational work, he now oversees a diverse array of project types. In addition to custom residences, his recent projects include steel-framed commercial and historic URM retrofit work, and he regularly contributes to other T&S projects which benefit from his specialized knowledge and attention to detail.

In addition to engineering, Bret enjoys spending time with his wife and daughters, being an elder and music leader at his church, and leading a local wine appreciation group.

Bret is a licensed professional engineer in the states of California, Oregon, and Arizona, and he is credentialed as a LEED® AP.